Don’t send a trademark to do a copyright’s job, forestry edition

Posted on August 27, 2018 by rtushnet
Munro v. Lucy Activewear, Inc., No. 16-4483 (8th Cir. Aug.
9, 2018)
Munro is an artist best known for his works “Field of Light”
and “Forest of Light”—“large-scale, immersive, light-based installations, and
exhibitions.” Lucy allegedly proposed a Lucy advertising and promotional
campaign featuring Munro’s work.  Relying
on a promise of confidentiality, Munro allegedly shared additional information with
Lucy about his prior work and disclosed that he was in talks with public
officials in Boston about creating a public exhibition in the city. In October
2013, Lucy launched a light exhibition and advertising campaign for Lucy in
Boston. “Light Forest” was an interactive light installation that responded to
the participants’ movements. Munro sued for infringement of trademark and trade
dress and usurpation of a prospective business opportunity. 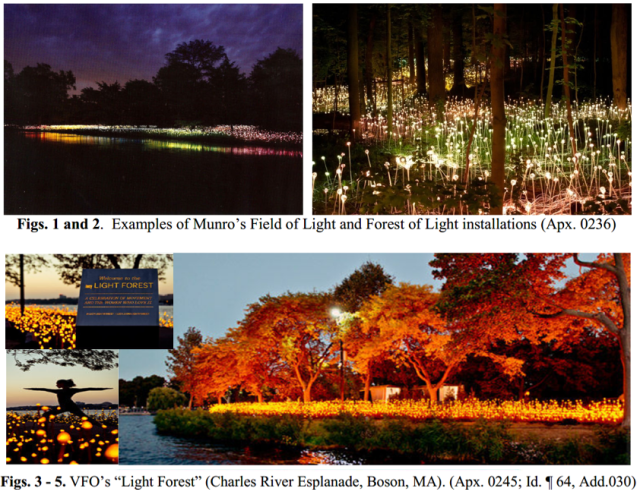 The trade dress claim failed because of Dastar (and Wal-Mart).  Munro’s allegation that Lucy created a
“knockoff” light installation that basically plagiarized his creative designs
sounded in copyright, not trademark. “Munro’s installation is not a ‘mark’ that
the Lanham Act was attempting to protect. Rather, the installation is the
product itself.”
Munro’s fraud claim failed because allegations that Lucy
didn’t keep its promises weren’t enough to make it plausible that Lucy didn’t
intend to keep those promises when it made them, as required for fraud. The
tortious interference claim was based on the theory that Lucy gave Boston an
alternative to his project in reproducing works similar to his sculptures, and was
therefore preempted by the Copyright Act.
Trademark infringement: this one survives, though for how
long is an open question.  Dastar didn’t bar the claim that Lucy’s
use of the name “Light Forest” was a confusingly similar and colorable
imitation of his “Forest of Light” and “Field of Light” trademarks. “[A]n
artist is considered the producer of the creative ideas of his work, but if the
artist also makes and sells his artwork himself, then he is considered the
producer of that good or service as well and is ‘able to assert a Lanham Act
claim for false designation of origin.’” Munro sufficiently alleged that he was
the producer and promoter of the underlying goods, which doesn’t quite get at
what the court of appeals described as the district court’s conclusion: that
Munro didn’t allege facts suggesting that the names served a source-identifying
function.  It’s not definitionally true
that, as the court of appeals concluded, “[b]ecause Munro produces these
installations, he is the ‘origin of goods’ or ‘source’ that the names identify,
which entitles him to bring an action under the Lanham Act.”  In addition, the names themselves must be
distinctive.  Given the underlying works,
the names here seem highly descriptive.
That doesn’t rule out acquired distinctiveness, but I wonder about the
proof there.

This entry was posted in Uncategorized and tagged dastar, Don't send a trademark to do a copyright's job, forestry edition copyright, trademark. Bookmark the permalink.