Posted on December 27, 2018 by rtushnet
Hunt v. Sunny Delight Beverages Co., No. 18-cv-00557-JLS-DFM,
2018 WL 6786265 (C.D. Cal. Dec. 18, 2018)
Some Sunny Delight beverages bear names derived from fruits,
such as “Orange Strawberry,” “Orange Pineapple,” “Strawberry Guava,” and
“Watermelon,” while others are less fruity, such as “Smooth & Sweet” or
“Blue Raspberry.” Plaintiffs alleged they bought several different varieties, including
the “Orange Strawberry” and “Orange Pineapple.” They brought the usual
California claims, alleging that none of the Products “contain any or all of
the actual juices from the displayed fruits,” and that the labels failed to
disclose this. They alleged that that the following images were true and
accurate representations of the “Orange Strawberry” and “Orange Pineapple” labels: 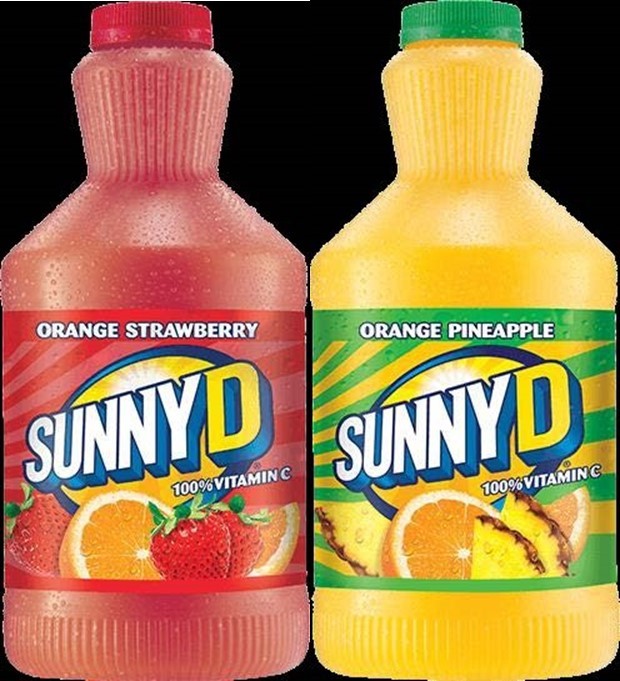 Sunny Delight sought to introduce evidence that the images
weren’t in fact true and accurate depictions of the labels. The court agreed
that this was improper at the pleading stage and denied the motion to dismiss.
Sunny Delight later moved for Rule 11 sanctions, alleging that plaintiffs knowingly
included inaccurate images and induced the court to rely on them.  The labels it proffered “include much, if not
all, the information that Plaintiffs allege is unlawfully missing, including
disclosures that the Products are ‘artificially flavored.’” Its chief marketing
officer submitted a declaration that
Sunny Delight has never sold a
product labeled as the ones [depicted in] the First Amended Complaint are
labeled. Sunny Delight product labels have always included more information
about the products than shown in [the FAC]. The images in [the FAC] that
Plaintiffs claim are the true labels they read and relied on are actually just
images from an old version of Sunny Delight’s website. Those were stylized
images used on the website only. They lack numerous details on the actual
labels because people looking at the website have trouble reading all the
things that are on the actual labels given the size of the images. Sunny
Delight has never sold any products with the labels reflected in [the FAC].
In addition, if plaintiffs bought Orange Strawberry within
the last 5 years, it would have had a front-of-pack statement disclosing artificial
ingredients. Deposition testimony from the named plaintiffs corroborated Sunny
Delight’s argument that these were stylized images.  Counsel “intimated to them that the stylized
online labels were identical to the in-store labels on the Products Plaintiffs
had purchased; neither [plaintiff] could fully recall the actual contents of
the labels on the purchased Products.”
The court found that plaintiffs and their counsel had knowingly
made false factual contentions in the first amended complaint, including the
allegation that the embedded image was a “true and accurate representation” of the
labels, as well as numerous allegations that likewise incorrectly described
those labels in ways that are central to the claims in the litigation. “These
falsehoods were not the product of reasonable mistake and were not mere
inaccuracies that would ‘likely have [had] evidentiary support after a
reasonable opportunity for further investigation or discovery.’”  Plaintiffs’ counsel acknowledged at the
hearing that they based the complaint on Sunny Delight’s website, not on the
labels on the actual products. “That approach might have been acceptable had Plaintiffs
purchased the Products based on a website image, but they did not…. It is
apparent that Plaintiffs’ counsel did not undertake the most fundamental of
investigations— namely, examining the actual Product labels—before filing the
First Amended Complaint.”  Counsel had
the opportunity to acknowledge the problem when Sunny Delight identified it,
but they compounded it instead, arguing that the court should take the
allegations as true.  This wasted the
court’s and Sunny Delight’s time and resources, and was sanctionable under Rule
11.
The court struck the first amended complaint rather than
parsing the allegations for any that were salveageable. However, the court
wouldn’t strike the complaint with prejudice.
Plaintiffs argued that at least some of their claims still had merit,
and the court didn’t rule on whether the presence of a front disclaimer would
preclude the claims as a matter of law. The court was also wary of confusing attorney
honesty with the merits; sanctions address only the former.  Nonetheless, to serve Rule 11’s deterrent
purposes, the court also awarded reasonable attorneys’ fees for preparing this
motion and the second motion to dismiss, where the misrepresented labels formed
the core of the dispute and were the primary basis for the court’s ruling.  Fees for general casework, or for the first motion
to dismiss—which was primarily about jurisdiction—were not included.