Posted on July 19, 2019 by rtushnet
Monster Energy Co. v. Vital
Pharmaceuticals, Inc., 2019 WL 3099711, No. EDCV 18-1882 JGB (SHKx) (C.D. Cal.
Jun. 17, 2019)
The court denied a preliminary injunction on Monster’s claim
that Vital falsely advertised its “Super Creatine” as “creatine,” because there
wasn’t sufficient evidence that the two were distinct (in meaning or more
significantly in function), and on tortious interference for lack of a showing
of irreparable harm.
Monster argued that using “creatine” on the labels of
Vital’s energy drink BANG (as part of a promise of “Creatine, Caffeine, CoQ10,
& BCAAs”) was literally false, because BANG does not contain creatine, and
that “Super Creatine” was impliedly false because BANG actually contains an
entirely different molecule, creatyl-L-leucine.
Monster’s expert tested four cans and found no creatine, or
only trace amounts, in the products.
Vital’s principal also made public statements that the products didn’t
contain “regular creatine.” The expert’s declaration stated that “Super
Creatine,” Vital’s term for creatyl-L-leucine, was a “chemically synthesized
compound” which is created from the linking of two distinct amino acids,
creatine and leucine, with properties “distinct from [those of] the constituent
amino acids.”
The court found Monster’s definition of “creatine” to be
“overly narrow,” since its own cited evidence established that “[m]any forms of
creatine exist in the marketplace,” including formulations combining creatine
with other amino acids. Monster also argued that creatyl-L-leucine does not
provide any of the benefits of creatine, but its evidence did not establish that
fact; it supported “only the more general conclusion that the chemical and
physical properties of a new substance formed from the combination of two amino
acids differs from their constituent parts.” Monster’s cited scientific journal
articles didn’t discuss creatyl-L-leucine, “but both state that at least some
of common creatine compounds provide similar or superior effects to those
provided by creatine alone.”  The burden
of proof was on Monster, and it did not meet that burden.
Monster also argued that BANG doesn’t contain enough Super
Creatine to provide the benefits that VPX promises consumers. But testing only
four cans of a single flavor of BANG purchased from the same retail store in
Southern California wasn’t enough to conclude that the results were
representative of BANG products generally. “The Court will not order a
nationwide recall on the basis of such a limited sample size.”
Intentional interference with
contractual relations: Monster showed that it had valid contracts for specific
amounts of in-store shelf and/or cooler space with retailers across the
country, and also showed that Vital disrupted those agreements, leading to BANG
products being stocked in Monster’s contracted-for retail shelving space in
retail locations across the country.
This wasn’t a matter of “wayward cans,” given the scope and duration of
the problem and documented statements from Vital’s leadership. One former Vital
account manager declared that district and regional managers directed him to
use “guerilla tactics” and “be aggressive” in order to obtain shelf and cooler
space for BANG at retail stores. “They made specific demands about the location
in which BANG should be placed … and instructed [him] to document the space he
acquired with photographs,” though he knew that competitors had contracts with
retailers about placement. There was also evidence that placement contracts
were industry custom, and that Vital’s principal made Instagram posts showing
intent, such as one that shows an image of a VPX products placed in front of
Monster products accompanied by the text “When in doubt block them out. In life
when they tell you there’s no shelf space – make your own shelf space! When
multibillion-dollar competitors pay for space retaliate with a vengeance,” and
another which states that VPX will “not placate to [a retailer’s] tomfoolery
and rigged system of paying for shelf space.” 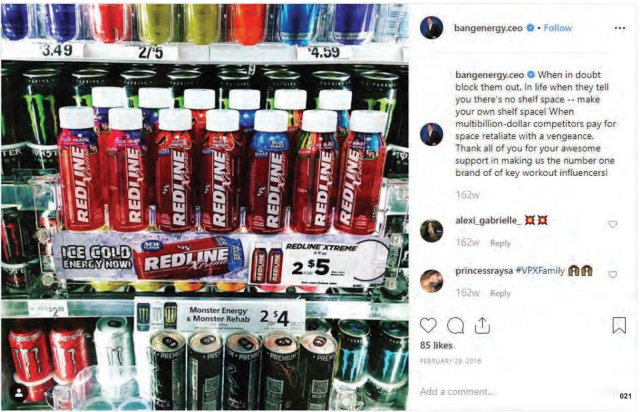 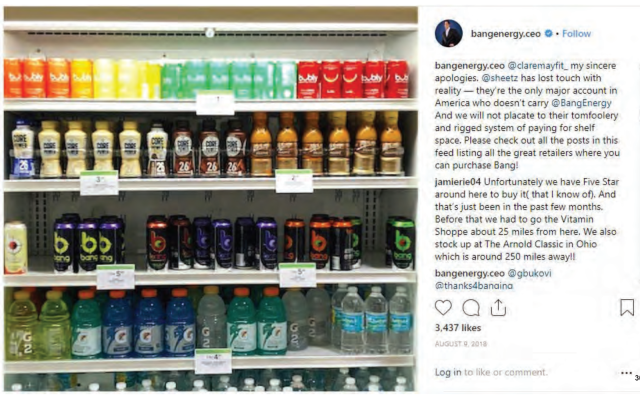 Defendants argued
that Monster failed to show that Vital or its agents had knowledge of the
existence of the specific shelving-space contracts between Monster and its
retailers with which they interfered. The evidence was to the contrary,
including public statements made by the principal which object to the industry
practice of paying for shelf space and state his intention to “make [his] own shelf
space” and “retaliate” against competitors who pay for space. [Ah, clients and
their social media.] “In light of the extent of this practice, Plaintiff need
not demonstrate specific knowledge of each contract in question in order to
demonstrate a likelihood of success on the merits.”  Likewise, the evidence showed that the
“wayward” cans in Monster’s shelving space were likely the result of defendants’
intentional conduct.
But there was very
little evidence of damages. While it may be the case that BANG’s sales growth
has been “fueled by VPX’s theft of Monster’s shelf and cooler space,” Monster
didn’t have good evidence backing this up.
There was no evidence connecting contractual interference with “the loss
of customer goodwill, the loss of market share, or the loss of profits,” making
harm speculative at this stage. So too with irreparable harm.