Posted on September 4, 2019 by rtushnet
Asurion, LLC v. SquareTrade, Inc., 2019 WL 4142154, No. 18-cv-01306
(M.D. Tenn. Aug. 30, 2019)
The parties compete to provide extended warranties for
mobile phones. Typically, wireless carriers bundle Asurion’s insurance with an
extended warranty and technical support and sell the combined “Carrier
Protection Plan.” SquareTrade sells a “Protection Plan” that provides
protection against defects and accidental damages for a variety of consumer
products, including cell phones, but doesn’t cover theft or loss as Asurion’s
plan does. In addition, the SquareTrade plan doesn’t include technical support,
as does the carrier bundle.
Asurion challenged a mail ad: 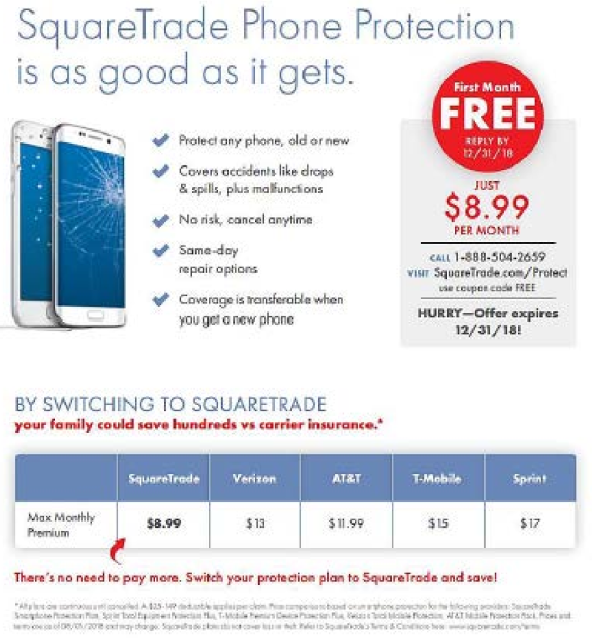 And an online ad:

The fine print in both advertisements states: “… Price
comparisons based on smart phone protection for the following providers: [a
bunch of bundles]. Prices and terms are as of 08/01/2018 and may change.
SquareTrade plans do not cover loss or theft. …”
Asurion alleged that the side-by-side comparison in the
advertisements falsely and misleadingly implies that SquareTrade offers
coverage equivalent to the bundles for a lower price and that using the name of
its affiliate, Allstate, in the online advertisement misleadingly implies
SquareTrade offers insurance (i.e. theft and loss protection). It alleged false
advertising under the Lanham Act and the Tennessee Consumer Protection Act (TCPA).
The court denied SquareTrade’s motion to dismiss.
Context matters; a disclaimer or clarifying language may
defeat a claim of deception “if it renders an otherwise false statement true,
so that consumers are not misled. To be effective, a disclaimer must actually
be read by the consumer. Consequently, a disclaimer that is unlikely to be read
because of its print size or location will not remedy a misleading claim.”
Asurion alleged misleadingness. At this stage, it needed to
plead facts that support a “plausible inference that the challenged
advertisements in fact misled a significant number of reasonable customers.”
The core of the complaint was the allegedly implied false equivalency between
the SquareTrade plan and the bundles. For example, the mailer allegedly falsely
suggested” that SquareTrade “offers insurance coverage by co-branding the
advertisement with Allstate (an insurance company) and stating ‘Stop overpaying
for phone insurance through your wireless carrier’ and ‘By switching to
SquareTrade your family could save hundreds vs. carrier insurance.’ ” [It
sounds a bit different to say “save on insurance by not paying for insurance.”]
Asurion argues that the logical conclusion implied by the statements and by the
comparison charts is that “a consumer could replace one of the Carrier
Protection Plans with SquareTrade’s plan without any change in coverage.”
SquareTrade argued that the fine print disclaimer avoided
misleadingness and that any reasonable consumer “would know that each plan
offered by a different company at a different price likely has some differences
in the services offered.” The court disagreed for purposes of a motion to
dismiss. “Here, the side-by-side comparison suggests that the plans are, if not
identical, at least comparable. The fine print disclaimer does not conclusively
remedy the potentially misleading nature of the advertisement as a whole. Other
than the notice that the SquareTrade plan does not cover loss or theft, the
fine print does nothing to dispel any misleading comparisons between
SquareTrade and the Carrier Protections Plans with which it is compared.”  Although people know that dog food isn’t made
from people food, “SquareTrade’s Protection Plan is not so obviously different
from the Carrier Protection plans that consumers would instinctively know they
were not the same product.”  Plus, even
the disclaimer didn’t explain that the other plans listed did cover
theft or loss, so it didn’t dispel the perception that the plans listed had
comparable coverage, the way the ingredient list on dog food explains what’s in
it.
For similar reasons, the TCPA claim survived, after the
court found that competitors had standing to bring such claims, given the
statutory language that a claim may be brought by any person, including
corporations, who “suffers an ascertainable loss” proximately caused by unfair
or deceptive actions declared unlawful by the TCPA.