TRO against insurer to provide information during open enrollment

Posted on October 24, 2019 by rtushnet
PeaceHealth v. Health Net Health Plan, Inc., 2019 WL 5386474,
No. 6:19-cv-01648-MK (D. Ore. Oct. 21, 2019)
Here, the court worries about granting a TRO as compelled
speech even though the speech is quintessentially commercial and the need to
protect consumers great. And then the court goes into great, and perhaps counterproductive, detail about the specifics of the disclosure, go figure.
PeaceHealth “operates hospitals and other healthcare
services in the Northwest, including Oregon and Washington.” It’s “the largest
health care provider in Lane County, Oregon and Clark County, Washington.” Defendants
offer Medicare Advantage (MA) plans to eligible consumers and made statements
that PeaceHealth would be an in-plan provider on defendants’ 2020 MA plans,
which it will not be. On this record, and because it’s open enrollment now and
the information is vital to consumers now but will soon be unhelpful for a
year, the court granted a TRO. (Side note: the state law claim might be better than the Lanham Act claim here, given that it’s not super clear how the conduct at issue affects PeaceHealth’s commercial interest in sales/reputation, but maybe there is mileage in the idea that being wrongly labeled as being in-network is like disparagement in its effects on reputation.)
The parties did have agreements for PeaceHealth to be
in-network for MA enrollees from 2004; in April 2019, Kimberly Hodgkinson,
PeaceHealth’s Executive VP and CFO, informed defendants’ president that PeaceHealth
would terminate the agreements effective January 1, 2020. Similar conversations
in June and July 2019 confirmed this. On September 30, 2019 and again on
October 1, 2019, Hodgkinson called defendants’ newly appointed President and
“reiterated that PeaceHealth would not be an in-network provider under the 2020
MA Plans. I expressed concern that Health Net and Trillium appeared to be
representing to brokers that PeaceHealth would be in-network under the 2020 MA
Plans.” PeaceHealth also sent letters to defendants on Oct. 1 telling them to
stop listing PeaceHealth as in-network on their websites and telling brokers
that PeaceHealth was in-network. “With open enrollment beginning October 15,
2019, time is of the essence.” They met again on October 8, 2019, and
Hodgkinson testifed that, after that, defendants “could not have reasonably
believed that there was any possibility that PeaceHealth would contract with
Health Net or Trillium for the 2020 MA Plans.” [The Lanham Act usually gives no
solace to reasonable but wrong beliefs, but I understand why PeaceHealth is
taking this tack, especially since predictions about the future have a liminal
status.]
The accused statements to brokers “generally acknowledged
that the parties were in negotiations, but implied defendants would remain ‘in-plan’
on January 1, 2020. … At this stage, especially as the two sides continued to
meet until October 8, 2019, it is difficult to find that defendants made false
or misleading statements to the brokers.” [This is how being conciliatory can
backfire—possibly declining the meeting would’ve been more persuasive to the
court?]
The court was far more concerned with statements to the
public. Portions of defendants’ webpages, up to oral argument, indicated that
PeaceHealth hospitals and providers were “in plan” for defendants’ 2020 plans.
When searching for “PeaceHealth” in the 2020 provider search portal, the
results displayed “Inactive after 12/31/2019 in multiple networks” under each
result. But a consumer searching for a specific PeaceHealth doctor wouldn’t see
that notice. A consumer seeking to confirm whether a specific doctor was “in
plan” for Health Net’s 2020 offering was likely to be misled.
Especially considering the plans at
issue cover society’s most vulnerable (i.e., disabled and elderly individuals),
the confusion noted above is quite concerning. Additionally, when open
enrollment closes in another month or so, any deceived consumers will be stuck
until the following year’s open enrollment. Consumers misled by Health Net’s
2020 provider search function would arrive at a PeaceHealth provider in 2020
only to then realize PeaceHealth is no longer “in plan.” This confusion will
likely lead to increased administrative costs to PeaceHealth, in addition to
reputational damage in the form of lost goodwill. Additionally, the Court
presumes the misleading statements would cause some consumers who would have
switched plans to instead remain with defendants’ plans. When those consumers
are not covered—and likely unable to afford out-of-pocket costs to see an
out-of-plan provider—PeaceHealth will experience the loss of providing care to
those consumers.
The grave risks to individuals and the temporary nature of
open enrollment made injunctive relief necessary. The court ordered that
defendants had to post notices on their websites and send email notification to
brokers. Example:
IMPORTANT NOTICE – PEACEHEALTH NOT
IN-NETWORK AS OF 1/1/2020
HEALTH NET HEALTH PLAN OF OREGON,
INC. WILL NOT HAVE A CONTRACT WITH PEACEHEALTH BEGINNING JANUARY 1, 2020. AS A
RESULT, PEACEHEALTH IS NON-CONTRACTED AND WILL NOT BE IN-NETWORK WITH ANY
HEALTH NET HEALTH PLAN OF OREGON MEDICARE ADVANTAGE PLANS. NON- CONTRACTED
PROVIDERS MAY NOT ACCEPT HEALTH NET INSURANCE.
[My understanding of all caps notices is that they don’t
necessarily work any better, and may be worse, than alternatives. At the least,
I would’ve stopped the all caps after the first line.]
The court further directed: “On each URL, all text must be
in banner format, CAPITALIZED and in 18-point Arial font. The banner must
include a red background with the text of the message in white lettering. The
headline must be in bold font. The notice must be inserted between one and two
inches below the top of the screen.” [Ed. note: which screens? Mobile, desktop,
both?  I also expect some accessibility
fail.] The text was to go where the words “Sample Company Post Employee Homepage
Notice” appear here: 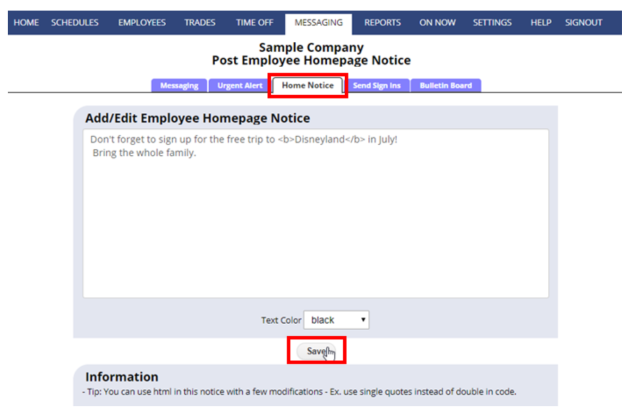 Emailed notices were to be the same.
The court acknowledged “First Amendment issues,” but the
compelled speech here was “purely factual and not in dispute. The public has a
right to know that the largest provider in the regions at issue will no longer
be ‘in plan,’ and the time to be so informed is during open enrollment.” But
given the constrained time period, defendants could brief the issue further.

This entry was posted in Uncategorized and tagged false advertising, TRO against insurer to provide information during open enrollment disclosures. Bookmark the permalink.