I can’t believe it’s not (vegan) butter: First Amendment invalidates standard of identity for butter as applied to vegan product 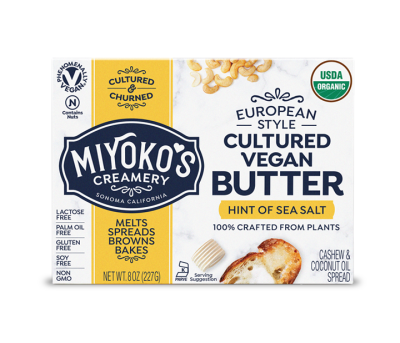 The California Department of Food and Agriculture told
Miyoko’s not to call its “vegan butter” product “butter” (it challenged certain
other aspects of the marketing but some of those challenges have been
abandoned). Miyoko’s sued and won a ruling that California law—and thus the
federal law that it adopts—violates the First Amendment insofar as the standard
of identity for butter prevents the use of “vegan butter” as a name for food
that clearly signals its nondairy status. “Lactose free” and “cruelty free”
also were literally true and could not be regulated on this record. However,
Miyoko’s did not receive a preliminary injunction against enforcement that
challenged its use of “hormone free” and
“revolutionizing dairy with plants,” both of which the court thought
were likely misleading.

“For nearly a century, the standard of identity for butter
has required a product ‘made exclusively from milk or cream, or both . . . and
containing not less than 80 per centum by weight of milk fat.’”

Both parties agreed that Central Hudson applied. If
the speech at issue is false or misleading, it can simply be banned under part
1 of the original CH test, which was the result for “hormone free” and  “revolutionizing dairy with plants.”

First, “because plants contain naturally-occurring hormones,
and because Miyoko’s vegan butter is made of plants, it necessarily contains
hormones as well. That the claim is literally false places it beyond the bounds
of protected commercial speech, fatally undermining Miyoko’s right to use it
without fear of reprisal.” Miyoko’s argued that consumers would understand the
phrase, in context, to mean that it didn’t contain “the artificial hormones
that are sometimes added to animal-based dairy products.” [The last I saw,
though there may be new evidence, the artificial hormones given to cattle have
not been shown to exist—much less be “added”—n the resulting dairy products.]
The court was unpersuaded. “Central Hudson insists, at the threshold,
that commercial speech be true, and provides no exception for falsities made
true by the target consumer’s supposed contextual awareness. … [N]o court has
ever repudiated a regulator’s authority to demand that products claiming to
lack hormones actually lack hormones.” It wouldn’t be illogical for any
consumer to believe that a product labelled “hormone free” does not contain
hormones.

“Lactose free” and “cruelty free” were literally true, but
also had to be analyzed in the context of their “quasi-close” proximity to
“vegan butter” in case they helped create or maintain deception.  Miyoko’s highlighted the “numerous phrases on
its label that point in an unmistakably non-dairy direction”: “vegan,” “made
from plants,” “cashew cream fermented with live cultures,” and “cashew &
coconut oil spread.” Without more, the state’s evidence of deceptiveness
(discussed in greater detail below) wasn’t enough to show deception.

However, “revolutionizing dairy with plants” was false
enough to regulate. Using the dictionary definition of “revolutionize,” the
phrase “denotes direct interaction with animal-based milk products in a way
that leaves them ‘fundamentally’ different than they were before.” But dairy
replacements do not revolutionize dairy; they leave it behind. Similarly, you
can’t “revolutionize leather with cotton,” or “revolutionize whiskey with
seltzer.” This claim was “plainly misleading,” relying purely on dictionary
definitions. [Which we all
know are always uncontroversial and relevant.]

Miyoko’s, however, succeeded in its core aim: “vegan butter”
was not inherently misleading. California pointed to the federal definition of
butter as being made “exclusively” from milk and cream, in place since 1923,
which the court found “circular”; Miyoko’s pointed to the long history of
apple, nut, and similar butters. Neither party’s use of definitions was itself
dispositive, so the court turned to other evidence, focusing on whether Miyoko’s
specific use of the word “butter,” “in immediate or close proximity” to terms
like “vegan,” “made from plants,” “cashew cream fermented with live cultures,”
and “cashew & coconut oil spread,” was misleading.

“Butter” was the most prominent word on the front of the
label, preceded by the smaller “European style cultured vegan” and directly
followed by the smaller “made from plants.” “Cashew cream fermented with live
cultures” was in even smaller text on the middle of the label’s bottom-left
quadrant, and “cashew & coconut oil spread” was tinier still.

The state didn’t meet its burden of showing misleadingness. As
to precedents: Courts have found that soymilk and almond milk aren’t deceptive,
and “even the least sophisticated consumer[] does not think soymilk comes from
a cow.” [This is empirically untrue, by the way, but then again there is a
tranche of consumers who say that peanut butter has dairy in it.] And
plant-based “meat” products have
also been allowed to use “meat” terms when framed with “ample terminology
to indicate [their] vegan or vegetarian nature . . . .” Nor was it convincing
to argue that butter was different because “[n]either milk nor meat has a
plant-based analog as well-known as margarine” given the current prevalence of
products like “soymilk,” “almond milk,” and “coconut milk.” Although eggless
“mayonnaise” might be deceptive, Duran v. Hampton Creek, 2016 WL 1191685 (N.D.
Cal. Mar. 28, 2016), that case involved an “uniquely unrepresentative label,” which
was “Just Mayo” and the picture of an egg, without any accompanying qualifiers
such as “vegan” or “made from plants.”

As to consumer evidence: the state’s showing of confusion
around plant-based dairy alternatives was “empirically underwhelming.” Although
some research exists—I used some for my advertising law midterm last year—the
state didn’t submit any. Miyoko’s submitted a study indicating, in relevant
part, that the public “accurately identifie[s] the source of animal-based milk
products 84% of the time, plant-based milk-products 88% of the time,
animal-based cheese products 81% of the time, and plant-based cheese products
74% of the time.” Even if 26% of the participants were confused by plant-based
cheeses, 19% were confused by animal-based cheeses; while 12% misidentified
plant-based milks, 16% misidentified animal-based milks. At most, consumers are
“perhaps a bit better at identifying traditional cheeses than vegan cheeses,”
and perhaps the opposite for vegan v. traditional milks. This “modest” result  “hardly cuts in favor of finding Miyoko’s use
of ‘butter’ inherently misleading.”

Finally, the court found “using the government-issued
dictionary” to be “troublingly self-fulfilling.” I find this objection
overblown. Especially where there is no clear definition or where consumers
might just not know the technical details, government definitions can
consolidate consumer expectations and, more importantly, insufficiently
signaled deviations can be deceptive. Suppose Miyoko’s just called its product
“just butter” and only explained what was going on in the ingredients list—as
in Just Mayo. Is there any question but that the government definition,
enforced for nearly a century, would be helpful in figuring out whether
consumers were likely to be deceived?

But the court found that the federal standards—which
distinguish between “butter” (dairy), “margarine” (which Miyoko’s product would
have to be called if it was slightly fattier), and “spreads”—have to reflect
“identifiable linguistic norms” to justify regulatory power over commercial
speech. But: Where are such norms to come from? Why wouldn’t they plausibly
come from nearly 100 years of regulation? What happens when a margarine producer
wants to call its product “butter” and argues—quite plausibly—that no
reasonable consumer knows the exact legal definition of butter or margarine?
Maybe the answer is that this is really about labeling, and vegan butter
labeling is cost-justified (helps more people than it hurts) while labeling
margarine as butter would not be. But those are usually considered to be
ordinary regulatory judgments, which is why First Amendment commercial speech
doctrine has latterly been accused of Lochnerism. Anyway, the court didn’t
credit the state’s “opinion” of what “butter” was.

Without misleadingness, CH factors two through four
also favored Miyoko’s. Although the court thought that, in the abstract,
government definition of terms might not be “more extensive than is necessary
to serve [the state’s] interest” in consumer protection, this restriction
didn’t directly advance the state’s interest. “In the narrow context of an
as-applied constitutional challenge, the State might satisfy this requirement
with a moderate showing of the ban’s tendency to redress harms caused by
Miyoko’s vegan butter in particular, if not the dairy-alternative market writ
large.” But the state didn’t show that this label had tricked anyone or
otherwise show a “unique[]” threat from the label. [Unique can’t possibly be
the right standard. Ordinary deceivers—which I’m not saying Miyoko’s is—are far
from unique. I think the court has to mean “something about the label’s use of
‘butter’ increases deception potential more than other uses of ‘vegan butter.’”]

This entry was posted in Uncategorized and tagged fda, first amendment, I can't believe it's not (vegan) butter: First Amendment invalidates standard of identity for butter as applied to vegan product false advert. Bookmark the permalink.