The Honey Badger case continues to screw up 9th Circuit law,
here making a movie’s protection against allegations of trademark infringement
based on its content appear contingent on the movie having a different vibe
than the trademark owner’s brand allegedly does. Ugh. At least MGM did win the
motion to dismiss, but with leave to amend.

Deus Ex Machina makes custom motorcycle parts, hand-built
motorcycles, and related goods, including clothing “compatible with a
motorcycle riding lifestyle.” It owns registrations for DEUS EX MACHINA for
various articles of clothing, including jackets and alleged that many years of
effort had created “a very specific brand image and reputation for quality,” drawing
on “custom motorcycle culture and vintage surf culture, along with the
intersection and mingling of those lifestyle cultures with art, music, and
other popular culture.” Its “core market” is males, ages 18 to 30 years
old.

Although sales of apparel and accessories comprise 80% of
its business, DEM alleged that it also makes and publishes movies to promote
its brand. Its movies “portray surf, motorcycle, and other cultural themes and
activities like music and snowboarding” and are “a core part of its cultural
foundation to enhance the value of its brand.”

MGM made “The Sun is Also a Star,” “a schmaltzy, teen-style
love story.” In the film and trailer, the “lead actress … Yara Shahidi” wears
a blue and rustic gold bomber jacket “with the words ‘DEUS EX MACHINA’
inscribed in the back in large letters.” It plays a role in the plot (and the plot of the book on which the film is based) because the male lead writes the phrase in a notebook before meeting the female lead and deciding they’re meant for each other based on her jacket. 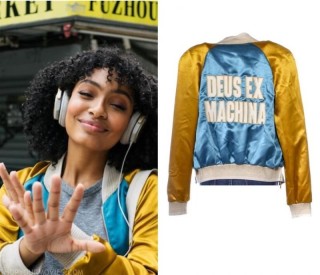 MGM allegedly authorized copies of the jacket to
be sold by, among others, two different websites. This jacket was allegedly inferior
in quality to plaintiff’s products, and inconsistent with what DEM’s consumers
expect from its products. (Although DEM alleged that a non-defendant actor who
played a teen in the film “posed for pictures posted to social media to help
promote the [Film] in which he wore clothing actually sold by [plaintiff],” he
wasn’t wearing the allegedly infringing jacket nor did DEM allege that MGM directed
or encouraged this appearance, so this part of the claim failed no matter what.)

DEM alleged that its customers and potential customers were
therefore “confused” as to the image it “is trying to create with its products,”
and it was being associated with a teen love story that is “totally
inconsistent” with its brand image.

Rogers applied to the film, its trailer, and the
promotional appearance by one of its stars in which he allegedly wore
plaintiff’s clothing because, as Empire held, “efforts to advertise,
promote, and market an expressive work are merely extensions of the use of a
mark in the original expressive work.”

Explicitly misleading as to source/content: This prong is
now complicated because, after Gordon, explicit misleadingness can be
implicit. However, it’s not enough to show that consumers are confused. The focus
is on “the nature of the [junior user’s] behavior” as opposed to “the impact of
the use.”

Comment: This is an implicit harmonization of the Ninth and
Second Circuit approaches: the Second doesn’t use Rogers in
title-v-title cases, but Empire said the Ninth would do so, but then Gordon’s
“same use” reasoning is really title-v-title on steroids. I think the Second
Circuit’s approach, which is confined to titles and based on the
advertising-like function of titles specifically, is a lot less dangerous than Gordon’s
standardless “same use” reasoning, which apparently applies to all parts of a
work. It’s not surprising that, in light of Gordon, the plaintiff here
asserts that it is somehow in the moviemaking business. The court’s addition of
“primary” to put the plaintiff’s uses in a hierarchy, so that Gordon will
benefit only TM plaintiffs who are actually in the business of producing
expressive works to make their money, is understandable but adds to the
epicycles and uncertainty here.

Anyhow, this analysis then turns into content analysis of
MGM’s movie:

Although plaintiff alleges that it
also produces movies to promote its brand, those movies promote plaintiff’s
brand story, which draws on custom motorcycle culture and vintage surf culture,
along with the intersection and mingling of those lifestyle cultures with art,
music, and other popular culture. Nothing in the Film touches on any of those
themes and activities. On the contrary, as plaintiff alleges, the Film is “a
schmaltzy, teen-style love story,” and is “totally inconsistent” with the brand
image that plaintiff has built. Moreover, the mark in the Film appears on a jacket
worn by a young female. This allegation also undermines a finding that the use
of the mark is explicitly misleading because plaintiff alleges that its
clothing, including its jackets, is “primarily marketed to males” between the
ages of 18 and 30.

Just to be super clear, if the content of the film were
focused on young males and surf culture, there would still be nothing
“explicit” about source, sponsorship, or affiliation in it.

Second, the court said, MGM added its own expressive content
to the film “beyond the mark itself.” The mark

plays only a part in a movie about,
among other things, two young people who meet and fall in love over the course
of the day, only to have events beyond their control tear them apart.
Specifically, the Film uses the mark to establish a connection between the
couple — as the young man writes the words “deus ex machina” in a notebook and
then later sees the young female wearing the Jacket bearing those same words.

Although the Court makes no
determination at this point as to the artistic relevance of the mark in the
Film, there is nothing in the Film or in plaintiff’s allegations to suggest
that the mark, itself, is the centerpiece of the Film or that, like the
unadorned use of the “Honey Badger” marks in Gordon, defendants used the
mark without adding any artistic expression of their own.

DEM’s own description of the film, “a schmaltzy, teen-style
love story,” was inconsistent with claiming that the mark was the centerpiece. (And
again, even a centerpiece—like an unauthorized biopic about Tiger
Woods—wouldn’t therefore be explicitly misleading about source or sponsorship.)

“Finally, although not dispositive, in and of itself,
the Film includes no affirmative or implicit statement indicating plaintiff’s
sponsorship of, or association with, the Film” (emphasis added). [That’s not
what “explicit” means!] The jacket has no reference to surfing, motorcycles, or
DEM’s “brand image.” The style and color were allegedly “inconsistent” with
DEM’s use of its mark.

Trademark dilution: Not plausibly famous. DEM alleged that its
mark was widely recognized only among “a discrete group of males,” and alleged
only conclusory facts about its sales, especially in the US, which it didn’t
enter until 2011.

The court did not dismiss the trademark infringement/false
advertising claims with respect to the online sales of the jacket. “To be sure,
an argument can be made that any purported sales of the Jacket could be
considered promotional materials related to the Film. But defendants, at the
pleading stage, cannot establish that fact, and plaintiff does not allege it.”
Nor would the court take judicial notice of printouts showing that DEM’s mark
didn’t appear on/wasn’t referenced in ads for the jacket, since those might
only be a snapshot of time. (Given Empire’s findings about promotional
goods, though, it’s hard to imagine how long this claim can last. Presumably
targeted discovery should commence.)

This entry was posted in Uncategorized and tagged MGM ekes out motion to dismiss TM claim against movie content false advertising, trademark. Bookmark the permalink.