Posted on June 6, 2019 by rtushnet
Ebony Media Operations, LLC v. Univision Communications
Inc., No. 18-cv-11434-AKH (S.D.N.Y. Jun. 3, 2019)
Judge Hellerstein called the question presented “interesting,”
but an even better adjective would be “easy”: “whether, in the case of a famous
magazine trademark, a competitor-magazine is guilty of infringing or diluting
the famous mark, and other wrongs, by publishing an image that prominently
displays the famous trademark to criticize the conduct of its owners.” The
answer is no. 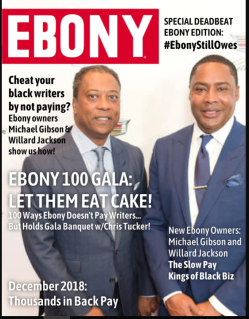 Ebony Magazine alleged that defendants infringed, diluted,
and engaged in false advertising by running an article, Dear
Ebony Magazine: FU, Pay Your Writers! [Corrected] with a mock Ebony cover
that used Ebony’s allegedly famous and definitely registered name. The mock
cover also featured a phtoto of owners Michael Gibson and Willard Jackson, and several
mock headlines:
•           “Special
Deadbeat Edition: #EbonyStillOwes”
•           “Cheat
your black writers by not paying? Ebony owners Michael Gibson & Willard
Jackson show us how!”
•           “Ebony
100 Gala: Let Them Eat Cake! 101 Ways Ebony Doesn’t Pay Writers . . . But Holds
Gala Banquet w/ Chris Tucker”
•           “New
Ebony Owners: Michael Gibson and Willard Jackson The Slow Play Kings of Black
Biz”
•           “December
2018: Thousands in Back Pay”
Ebony sued for trademark infringement, unfair competition,
trademark dilution, and false advertising in violation of the Lanham Act; and
tortious interference, unfair and deceptive business practices, and unfair
competition under New York law.
As we know, “[t]he Lanham Act must be construed narrowly to
avoid conflict with First Amendment values.” And parody has value.  The central fact was that the accused image “uses
parody to enhance Ross’ s article, the primary purpose of which is to criticize
EBONY Magazine,” and that was fatal to each claim. “That Defendants compete
with Plaintiff, and allegedly published the article, in part, to harm Plaintiff
s business, is insufficient to overcome the protection to which Defendants’
parodic and critical expressions are entitled.”
Because Ebony is a mark for an expressive work, the court didn’t
use Rogers but did use the Polaroid factors with appropriate weight
to the First Amendment interests at stake. [Note that the Ninth Circuit just
uses Rogers even when the plaintiff’s
mark is for expressive works too; I think this is probably the better approach,
at the very least for the content of works as this use is—the picture appeared
in the middle of the story.]
Notably, nominative fair use was no help to defendants
because of the Second Circuit’s bizarre loading of the NFU factors into the
usual multifactor test in IISSCC. The district court reasoned:
[P]arody is ill-suited to analysis
under the three nominative fair use factors because the use rarely will be: (1)
necessary to describe plaintiff s product or service, since parody involves
distortion and alteration rather than description [probably not a good reading
of “necessary,” which is about whether people will know what you’re talking
about, and the use of Ebony’s mark in the parody is pretty necessary]; (2)
limited to what is necessary for identification, since the purpose of parody is
to evoke and mimic the original; or (3) true and accurate, in a literal sense,
about the relationship between the products, since parody often contains strong
elements of sarcasm and irony.
Nonetheless, there was no plausible allegation of a risk of
confusion that would outweigh the public interest in free expression. Strength of
mark: makes parody less likely to confuse. Similarity of marks: though the mark
was reproduced without significant alteration, the context “immediately removed
any semblance of true similarity. Each of the five headlines on the Accused
Image is harshly and unambiguously critical of EBONY Magazine…. It is difficult
to imagine any reader experiencing confusion as to whether or not EBONY
Magazine sponsored or endorsed a cover that portrays it in such a negative
light.” Proximity: there was no direct competition with Ebony’s products, and
it wasn’t plausible that Ebony would bridge the gap by “providing competing
coverage of its alleged underpayment of its contributing writers.” Actual
confusion: the complaint didn’t plead facts suggesting discovery would yield
any such evidence.  And though the
complaint pled bad faith as to accuracy, it didn’t plead bad faith as to
confusion. Quality of defendants’ product/sophistication of consumers: neutral.
“In sum, the substantial public interest in free expression
far outweighs any risk of confusion created by the Accused Image.”
Dilution: Two exceptions to federal dilution law clearly
applied, “[a]ll forms of news reporting and news commentary,” and fair use of a
mark in connection with “identifying and parodying, criticizing, or commenting upon
the famous mark owner or the goods or services of the famous mark owner.”
False advertising: this wasn’t “ ‘commercial speech,’ (2)
made ‘for the purpose of influencing consumers to buy defendant’s goods or
services,’ and (3) ‘. . . disseminated sufficiently to the relevant purchasing
public.’” Gmurzynska v. Hutton, 355 F.3d 206, 210 (2d Cir. 2004); also citing Croton
Watch Co. v. Nat’l Jeweler Magazine, Inc. , No. 06 Civ. 662 (GBD), 2006 WL
2254818, at *10 (S.D.N.Y. Aug. 7, 2006) (“The non-commercial nature of a
journalist’s article cannot be overcome by plaintiff claiming an improper
purpose motivated the publisher to run the article.”).  The accused image was a parody, “made by a
professional writer for inclusion in his article in Defendants’ online magazine;
it does not mention any of Defendant’s goods or services, much less promote
them; it pertains to an issue of public importance, i.e., a leading magazine’s
treatment of its contributing writers; and, although it may implicitly invite
comparison between how Plaintiff and Defendants treat their writers, the
central message of the Accused Image, and the article in which it appears, is
simply that Plaintiff should pay its writers in a timely fashion.”
The state law claims failed for the same reasons.