Posted on September 26, 2019 by rtushnet
TSI Prods., Inc. v. Armor All/STP Prods. Co., 2019 WL
4600310, Nos. 17-cv-01131, 18-cv-1682 (MPS) (D. Conn. Sept. 23, 2019)
TSI sued defendants for trademark infringement, unfair
competition, and false advertising under the Lanham Act; for Sherman Act
violations; and for violations of the Connecticut Unfair Trade Practices Act
(CUTPA). Astonishingly, all claims survived a motion to dismiss.
The parties compete in the market for do-it-yourself
refrigerant products and recharge kits, which permit car owners to recharge
their vehicle air conditioning (AC) systems on their own. They’re sold in
specialty automative stores and automotive departments of stores such as
Walmart. “[T]he non-value-added refrigerant category consists mainly of cans of
R-134a refrigerant, without any included additives, tools, gauges, or hoses….
[T]he category of value-added automotive AC recharge kits consist of cans of
R-134a refrigerant that also typically contain some combination of additives,
lubricants, hoses, gauges, or other tools.” The parties compete in both
categories.
TSI sells its refrigerant and recharge kits under the brand
names AVALANCHE, AC AVALANCHE, and BLACK DIAMOND AVALANCHE. TSI has registrations
for AVALANCHE and BLACK DIAMOND AVALANCHE. It claims rights in the mountain
logos used with its word marks.
Armor All bought “AC AVALANCHE” as a Google ad word, putting
an Armor All ad at the top of the search results. Armor All allegedly “made no
effort to distinguish themselves and their products from TSI, either in the
Google ad itself or on the linked AC Pro Website webpage.”
Prior to 2017, Armor All allegedly did not “utilize any
mountain imagery in its packaging of ARCTIC FREEZE products,” but started using
one that allegedly “looks confusingly similar” to the mountain logo on TSI’s
products and “causes customer confusion as to the source of the goods.”
TSI also alleged that Armor All made a number of
misrepresentations about its own products, e.g. “Our kits come with everything
you need to recharge your system with no additional tools or equipment,” “fast,
easy and accurate recharging,” and “just three easy steps.” For its refrigerant,
it claimed “#1 Rated Coldest Air” and “#1 Coldest Air,” “Formula with 2X
cooling boosters vs. the next leading brand of AC recharge kits: independently
tested to deliver the coldest air from your vehicle’s AC,” and “A/C PRO ultra
synthetic refrigerant kit features a specially designed formula that helps a
vehicle’s A/C produce the coldest air.”
In the smaller “market for value-added auto AC recharge kits
in the United States,” Armor All had an estimated market share of 88% in 2017.
TSI is Armor All’s largest competitor in terms of market share, with
approximately 10% share , and prior to TSI’s entry into the value-added AC
recharge kit market in 2015, Armor All did not face substantial competition in
that market. Armor All allegedly paid off retailer Advance Auto “to renege on
its agreement with TSI and refuse to allocate shelf space to TSI’s products,”
and made a similar deal with Pep Boys.
Armor All also sent TSI a letter alleging infringement of
two patents. TSI hired a lawyer and responded. Neither Armor All nor its predecessor allegedly had a “good
faith belief that TSI infringed” either patent. Armor All allegedly “notified
retailers within the relevant market” about the companion lawsuit consolidated
with this one, which Armor All filed against TSI in 2017.
Keyword ads: although this is worded broadly, Armor All used
TSI’s mark as the beginning of its ad text in a way that wasn’t explicitly
comparative, and that’s clearly vital.  Edible
Arrangements, LLC v. Provide Commerce, Inc., No. 3:14-CV-00250 (VLB), 2016 WL
4074121, at *11 (D. Conn. July 29, 2016), adopted the “perspective of a user of
the internet search engine at issue,” and focused particularly on “(i) the
strength of the plaintiff’s mark as a unique search term related to a distinct
line of products, … (ii) the similarity of the marks and whether the
defendant’s mark draws a clear distinction as a competing brand…. [and] (iii)
what the consumer saw on the screen and reasonably believed, given the
context.” Armor All contended that “the purchase of a competitor’s marks as
keywords alone, without additional behavior that confuses consumers, is not
actionable.” TSI alleged that the displayed ad looked like this:

To be clear, A/C Pro is the competing product.  Armor All argued that the result was
prominently labeled as an ad, that it was only one of several ads, and that the
webpage hosted at the link address didn’t “any reference to TSI or its
AVALANCHE products.” Mot. to Dismiss, ECF No. 102 at 16. Armor All it argued
that the structure of the advertisement itself (“AC Avalanche – A/C Pro Saves
You Time & Money – acprocold.com”) separated the search term (“AC
Avalanche”) from Armor All’s “comparative advertising slogan,” making confusion
unlikely.
The court disagreed, and I do too. Drawing all reasonable
inferences in favor of TSI, the combination of keyword purchases plus ad text
was plausibly confusing. “AC Avalanche” and “A/C Pro” weren’t presented as
competing brands in the context of the advertisement. This was not, as alleged,
a clear “three-part structure: ‘[search keyword] – [advertising slogan] –
[website address].’ ” As the court pointed out, in the example shown, other
sponsored advertisements use hyphens but follow different structures: the other
two sponsored ads didn’t use the “AC Avalanche” search term at all, and neither
appeared to use two competing brands or companies. “Try Pepsi – It is Better
than Coca-Cola” or “Stop Collection Calls—is Allied Interstate Calling You” have
been found nonconfusing, but the ad here made no clear distinction between the
terms. “The overall context makes it plausible that the hyphen implies
association rather than disassociation.” 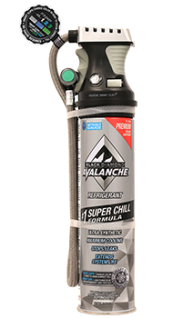 The mountain logo unfair competition/infringement claim also
survived. This one is a harder sell for me on plausibility—I would think that absent
more similarity in the words, the use of the mountain concept in very different
forms isn’t plausibly confusing—but Armor All focused on ownership (not
suitable for resolution on a motion to dismiss) and argued that its 2014
registered copyright on its “ARCTIC FREEZE Mountain Label” used a mountain logo
and preceded TSI’s alleged first use of the mountain logos in 2015. That failed
because owning a copyright isn’t a defense to infringement (though that’s not
exactly the claim here, which is priority-based, not copyright-ownership-based;
the copyright registration is judicially noticeable evidence of use preceding plaintiff’s
claimed first use).  The court nonetheless
accepted the factual pleading that Armor All did not use any mountain imagery
on its refrigerant products until 2017.
(I wonder about whether there’s any exposure to fees if in fact the 2014
use really reflects what was on the market and TSI persists in this claim.)
False advertising: The court can kick claims based on clearly
subjective opinions out on a motion to dismiss, but should dismiss false
advertising claims only if the statements “fall comfortably within the category
of non-actionable puffery.”
Recharge kit statements: Armor All’s kits consist of
refrigerant, a hose and trigger dispenser, and a gauge that measures the
“pressure on the low side of the AC system” and indicates a “suggested fill
range.” TSI alleged that measuring the pressure only on the low side of a car’s
AC system can “lead to unusable and inaccurate pressure readings” for the
“[m]any AC systems [that] use a BLOCK or TXV valve [to] regulate the flow of
refrigerant.” This can lead consumers to overcharge their systems, which is are
costly to repair. Based on these allegations, TSI alleged that statements such
as “Our kits come with everything you need to recharge your system with no
additional tools or equipment,” “Extends A/C/ Life,” “fast and accurate
recharging,” and “The trigger dispenser and measuring gauge make filling your
system to the proper level fast and easy” were literally false and misleading.
Some of these statements—such as “Extends A/C Life,”
“Protects [A/C] System,” “just three easy steps,” and “Easy as 1, 2 …
Squeeze”—were non-actionable puffery, as did use of the terms “fast,” easy,”
“convenient,” and “a breeze.” However statements were specific enough to be
actionable. “All-in-One Kit” and “Come with everything you need to recharge
your system with no additional tools or equipment” implied and outright stated,
respectively, that “no additional tools” were needed to recharge an AC system.
Based on TSI’s allegations, these statements were false because “[a]dditional
tools and equipment are required to safely recharge AC systems with BLOCK or
TXV valves” using Armor All’s kit.  Likewise,
claims to provide “accurate” recharging and “make filling your system to the
proper level fast and easy” were statements of measurable fact that were
allegedly false.
Refrigerant formula: Armor All’s products contain lubricants
and additives in addition to refrigerant. TSI alleged that other AC recharging
products sold in the United States contain only refrigerant (R-134a), and that
a can containing only refrigerant will create colder air than a can of equal
volume that contains refrigerant along with lubricant and/or additives. Thus,
it alleged that the following statements were false: “#1 Rated Coldest Air” and
“#1 Coldest Air,” “Formula with 2X cooling boosters vs. the next leading brand
of AC recharge kits: independently tested to deliver the coldest air from your
vehicle’s AC,” and “A/C PRO ultra synthetic refrigerant kit features a specially
designed formula that helps a vehicle’s A/C produce the coldest air.”
Armor All argued that many courts have found “referring to a
product or service as ‘#1’ with regard to an industry or quality” to be
puffery. But not so here. “#1” advertising statements are non-actionable “when
it is unclear how a property should be measured.” But “coldest” is a statement
of superiority in a specific, measurable attribute. Courts have indeed been skeptical
of superlatives, but “coldest” is not the same type of superlative as “best” etc.  It is objectively verifiable. Armor All’s
claims that its products ave been “independently tested to deliver the coldest
air from your vehicle” and contain “a specially designed formula that helps a
vehicle’s A/C produce the coldest air” stated even more specifics; “claims of
testing are typically actionable.”
The antitrust claims survived too—surprise!