Posted on May 31, 2019 by rtushnet
Long post, lots of stuff to cover in this opinion.
MillerCoors, LLC v. Anheuser-Busch Cos., No. 19-cv-218-wmc
(W.D. Wisc. May 24, 2019)
There’s an apocryphal ad story about a cannery stuck with
unmarketable pale salmon that turned its disadvantage around by labeling the
product as “Guaranteed not to turn pink in the can!” (The competitors supposedly
responded by advertising that their products contained no bleach.)  The point is that the advertising context
itself conveys a lot of meaning: in particular, aspects of one’s own product
that one presents proudly are good, while aspects of the competition’s product
that one brays loudly about are bad, even (or especially) if the consumer has
no other information about how to identify good/bad characteristics.  AB took advantage of this standard feature of
human communication, and got sued for it.
There’s a lot of detail here (and really good lawyering on
both sides), but: AB started an ad campaign highlighting MC’s use of corn syrup
in brewing Miller Lite and Coors Lite, whereas AB uses rice in Bud Light (but
corn syrup in various other AB beverages).
MC sued for false advertising and trademark dilution; the court granted
a preliminary injunction limited to ads that indicated in some way that Miller
Lite and Coors Lite actually contained corn syrup when consumers drank it,
specifically: (1) Bud Light contains “100% less corn syrup”; (2) Bud Light in
direct reference to “no corn syrup” without any reference to “brewed with,”
“made with” or “uses”; (3) Miller Lite and/or Coors Light and “corn syrup”
without including any reference to “brewed with,” “made with” or “uses”; and
(4) describing “corn syrup” as an ingredient “in” the finished product.  In addition, “the court would strongly
encourage advance clearance before adopting any phrase or creative license in
an attempt to maneuver around the prohibitions.”
The most disappointing part of the opinion for me was the
court’s refusal to dismiss the trademark dilution claim because fair use is an
affirmative defense. First, that’s new law as far as I’m aware, and given the
First Amendment implications of applying dilution law to comparative
advertising, it’s not a well-justified decision.  (The Ninth Circuit has held that in nominative
fair use cases (which this is), the defendant’s only burden is to show that the
use is referential (which MC pled), after which the burden shifts back to the
plaintiff to show lack of entitlement to the defense.) Second, even so, the
complaint clearly pled itself out of court; there is no way that this is not
comparative advertising/nominative fair use.
On to the main event: The yeast that makes beer needs a
nutrient substrate with sugars.  Sugars
can come from malt, “or from a combination of malt and starchy grains like corn
or rice.” The parties agreed that the sugar source relates to style and taste
characteristics, though cost may also be a factor: corn syrup is cheaper than
rice.  “There is no meaningful difference
between using rice or corn syrup as an ingredient in terms of health or safety
of the resulting beer product.”
Fermentation “converts the corn syrup sugars into ethanol, flavors,
aromas, carbon dioxide, heat and a next generation of yeast cells, leaving a
small amount of residual sugars.” No corn syrup remains in the Coors Light and
Miller Lite products at the end of fermentation, and none is added.
Nonetheless, AB launched a huge ad campaign featuring claims
that Miller Lite and Coors Light are “made with” or “brewed with” corn syrup. Here’s
one Super Bowl ad.  Suffice it to say
that the gist—central to the ads and much repeated—is that Bud Light doesn’t
use corn syrup and Miller Lite/Coors Light do (“made with” and “brewed with”
are frequently repeated).  AB billboards
touted “100% less corn syrup” than the two competitors. An AB Twitter account posted
an image displaying a Miller Lite can next to a Karo corn syrup bottle as if in
a family portrait, and a Facebook user posted a similar image, referencing the
campaign:
Another ad showed the following frames: 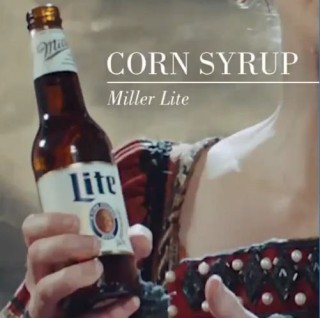 Another ad mocked MC for complaining and an AB character suggested
“also imitating us by putting an ingredients label on your packaging. People
want to know what ingredients are in their beer. But what do I know? I’m just
the king of a kingdom that doesn’t brew beer with corn syrup.”
Beer Business Daily reported that according to Andy Goeler, AB’s
head of marketing for Bud Light, “[Anheuser-Busch] did focus-group the heck out
of this [Special Delivery] ad, and found consumers generally don’t
differentiate between high fructose corn syrup and corn syrup, and that it is a
major triggering point in choosing brands to purchase, particularly among
women.”  In another interview, in response
to the question, “What is wrong with corn syrup?,” Goeler responded: “People
started to react to corn syrup, they started to react to no preservatives, and
they started to react to no artificial flavors. There are things that consumers
on their own had perceptions — for whatever reason — that there were ingredients
they preferred not to consume if they didn’t have to.”  The interviewer noted that AB focused on corn
syrup and not preservatives and asked why Goeler thought “consumers see corn
syrup as something they don’t want.” He called it “an ingredient some prefer
not to consume is the simple answer. . . . [S]ome consumers — for their own
personal reasons — have concluded that they prefer not putting something like
corn syrup, if they had a choice, into their body.”
Though this is in one sense an ordinary bullshit nonanswer,
it contains the key conflation at issue here: treating the brewing substrate as
if it were what consumers “put[] … into their body,” which it is not.  Goeler’s answer recognizes the obvious fact
that consumers have no particular reason to think about the distinction between
beginning ingredients and the stuff in the can, and the ads are self-evidently
encouraging consumers to consider the stuff in the can as if it still contained
corn syrup, which is a reason to buy Bud Light instead.  What would be the point of the ads
otherwise?  [See discussion of Grice
below.]  Anyway, in another interview,
Goeler stated that AB would continue to focus on “ingredient transparency,” and
AB’s senior director of corporation communications echoed this, concluding that
“Knowing what is and isn’t in your beer — whether you paid for it or not —
can only be good for the beer industry overall.”  Again: there’s no corn syrup in MC beer, but of course that’s the
message; the use of “made with” and “brewed with” does not tell consumers
otherwise.
MC submitted a survey in which the control ad was the same as
the test ad, but with an added, prominent disclaimer: “While corn syrup is used
during the brewing of Miller Lite and Coors Light, there is NO corn syrup in
the Miller Lite and Coors Light you drink.” Its expert concluded that “61
percent of respondents who saw the test stimulus believe that corn syrup is in
the Miller Lite and/or Coors Light you drink,” compared to 26 percent in the
control, for 35% net confusion. The expert also concluded based on an analysis
of open-ended responses that the phrase “‘made with’ used in the Bud Light
commercial to describe the relationship between Miller Lite and/or Coors Light
and corn syrup is ambiguous.”
MC also argued that AB’s ads exploited or furthered
misconceptions about corn syrup and high fructose corn syrup (HFCS).  They are not the same thing, but MC’s industry
expert identified “a common point of confusion about corn syrup and HFCS,
despite the fact that they are very different products.” The survey expert
concluded that “more respondents who saw the test stimulus (24 percent) than
who saw the control stimulus (19 percent) believed that the commercial says,
suggests, or implies that corn syrup and high fructose corn syrup are the
same.”
Unsurprisingly, after the ad campaign was launched, MC received
a bunch of consumer communications related to corn syrup, up from basically
none. The survey expert also analyzed these, and found that 18% indicated that
the presence of corn syrup would end or decrease their purchases of MC beers
and 4% indicated they’d start or increase purchases.  Relatedly, social media responses indicated
that consumers were reacting to the ads as if corn syrup were a bad thing.  Of consumer posts that mentioned corn syrup
and at least one of the relevant brands, 22% expressed negative sentiments and
9.8% expressed positive sentiments. Similarly, 28.6% of consumer posts indicated
a mistaken belief that corn syrup used in brewing is present in the final
product (the beer itself), while only 6.9% of posts demonstrated understanding
that corn syrup wasn’t present in the final beverage. 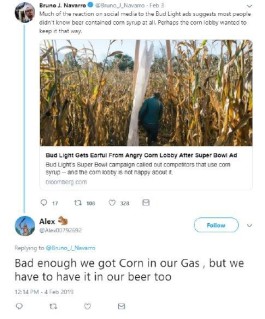 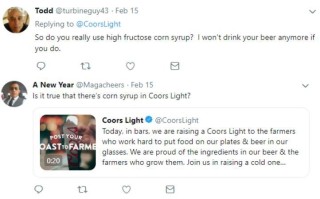